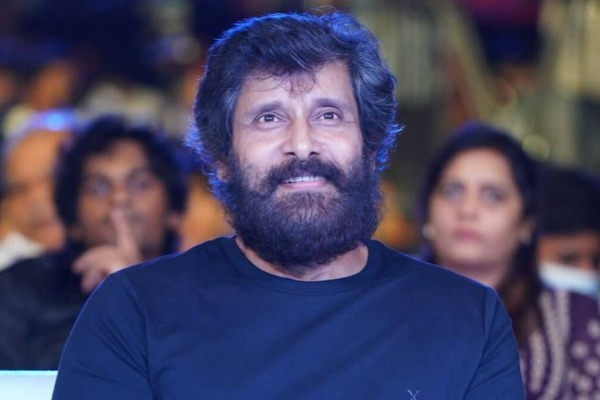 South superstar Vikram says he is doing well and was in hospital following "mild chest discomfort" and not a cardiac arrest as blown up by sections of the media and some "creative" minds on social media platforms.

The 56-year-old actor, who was admitted to a Chennai hospital last week, assured his fans he was well and thanked them for their wishes.
"There was a mild chest discomfort. I went to the hospital only for that. But it was blown out of proportion. I am doing well... When all of you are there with me nothing will happen to me. My family, friends, fans and you are there for me," Vikram said at the audio launch of his upcoming Tamil film "Cobra" on Monday evening.
The National Award winner was taken to Kauvery Hospital on Wednesday but reports of his hospitalisation surfaced on Friday, hours before the teaser launch of his much-anticipated period drama "Ponniyin Selvan: I".
Soon, rumours that he had suffered a cardiac arrest started doing the rounds. The claim was dismissed by hospital authorities as well as Vikram's manager Suryanarayanan M. The actor was discharged from the hospital on Saturday.
Taking a swipe at the media, the star of films such as "Pithamagan", "Anniyan" and "Raavanan" said he saw a lot of misinformation floating about his health.
People also got "creative", Vikram said, recounting how a thumbnail was photoshopped by some who morphed his face on a patient.
"I should not place my hand on my chest. They (the media) may come up with a claim that I am having a heart attack. I can visualise the headline they may pick for tomorrow's edition.
"They may say that what they had predicted was confirmed by Vikram. They may say that Vikram gestured that he had a heart attack while he was on the dais for 'Cobra' audio launch," he said.
Directed by Ajay Gnanamuthu with A R Rahman as music composer, "Cobra" is set to be released in theatres on August 11. It also stars Srinidhi Shetty, Miya George, Roshan Mathew, and marks the feature film debut of cricketer Irfan Pathan.