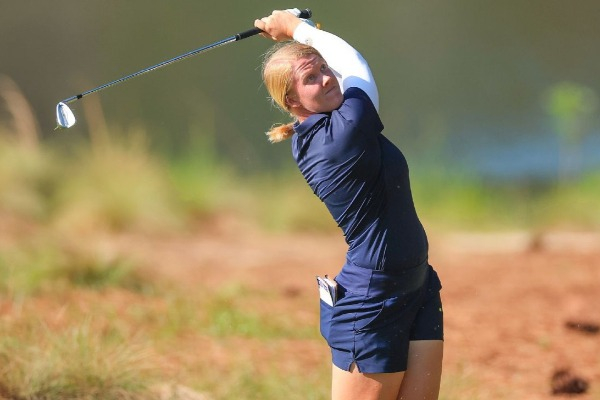 Ingrid Lindblad decided months ago that she wanted to stay in college instead of turning professional.

That might be a financial decision she comes to regret.
The 22-year-old Swede shot the lowest round by an amateur in the 77-year history of the U.S. Women's Open, a 6-under 65 that left her a shot behind first-round leader Mina Harigae on Thursday.
Because she's an amateur, Lindblad wouldn't be able to collect the record 1.8 million first-place prize if she wins. She would have had to declare as a professional before the tournament began.
When asked if, in hindsight, that was a mistake, the LSU junior known to her friends as "Iggy" paused and said with a smile, "I'm going to stay in college for like another year or so.
"But when you say it, yeah ... it would have been fun to win a little bit of money, she said.
She has a 54 holes to navigate, but Lindblad has a chance to become only the second amateur to win the U.S. Women's Open. The other was Catherine Lacoste in 1967.
Lindblad didn't seem overwhelmed at the opportunity.
"Yeah, it's possible, she said.
Three amateurs had previously shot 66 Carol Semple Thompson in 1994, Brittany Lincicome in 2004 and Gina Kim in 2019.
Lindblad tied for 30th at 6-over 292 in her only other U.S. Women's Open appearance in 2020.
She set the tone for a strong opening round in Southern Pines by winning the Southeastern Conference individual championship in April after making a 38-foot eagle putt on the 18th hole. She showed some of that same prowess on Thursday, needing only 26 putts.
"She was fearless," said Lindblad's playing partner, Annika Sorenstam, Sweden's most famous female golfer and a three-time U.S. Women's Open champion.
Lindblad will have to contend with what is shaping up to be a strong leaderboard.
Three-time major winner Anna Nordqvist, also from Sweden, and 2021 Evian Championship champion Minjee Lee of Australia were at 67 with American Ryann O'Toole.
Lexi Thompson, who surrendered a five-shot lead in the final round of last year in the event and lost by a stroke, was four shots back after an opening round 68. Fellow American Ally Ewing also shot 68.
"As far as last year, it's over with, it's this year," Thompson said. "I took it, I learned from it, and I moved on."
South Korea's Jin Young Ko, the world's top-ranked player and one of the most consistent ball-strikers in the tournament, shot a 69 hitting 13 of 14 greens in regulation.
"I was just trying to get the middle of the green every shot, every hole, Ko said. It's difficult because the green looks wider but the landing area is smaller."
Nelly Korda looked strong in her return from surgery and appears ready to contend, as well.
Outside of a double bogey at the par-4 11th, the world's No. 2-ranked player played a fairly flawless round in her first competitive tournament since Feb. 25 after developing a blood clot in her arm. She shot 70.
"I definitely had a lot of adrenaline on that first hole. I think I piped my driver so far, Korda said. I like kind of felt sick how much adrenaline I was feeling, and then calmed myself down and played pretty well. Just had one unfortunate lost ball on I think 11, but other than that I played pretty solid.
Lydia Ko shot 72.
Michelle Wie West finished with a 73 in what is expected to be her second-to-last major before retiring.
Defending champion Yuka Saso from Japan struggled, shooting 77.
The 51-year-old Sorenstam, a 10-time major champion, was even par after her first 13 holes but finished with a 74 after qualifying for the event by winning the U.S. Women's Senior Open last year. She said she no longer gets mad at herself when things don't go well and is simply trying to enjoy the tournament with her family. She won at Pine Needles in 1996.
Harigae has 19 career top 10s on the LPGA Tour but this is the first time she's led a tournament.
She shot 30 on the front nine and surged ahead of Lindblad with birdie on the par-3 16th hole on a heat-drenched afternoon that drove some spectators to the exits early.
Harigae, who played one year at Duke before turning pro, said she was thrilled to be back in North Carolina, joking that she drew inspiration from six-time NBA champion Michael Jordan, who played for the Tar Heels.
"Obviously, being a big Jordan fan, so just kind of like going off the Jordan vibes, Harigae said.