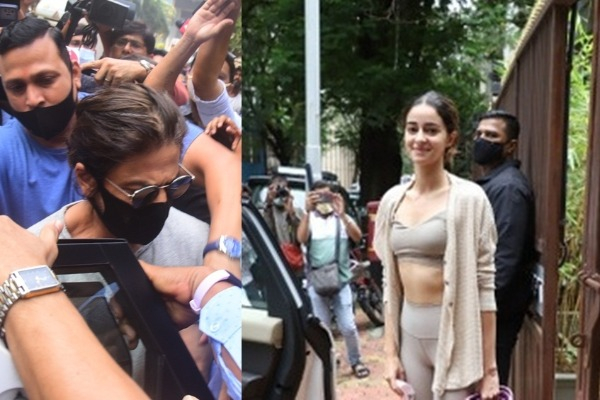 Officials of the Narcotics Control Bureau (NCB) visited the residence of Bollywood superstar Shah Rukh Khan on Thursday in connection with their investigation into a cruise drugs party case, sources said.

The actor's son, Aryan Khan, was arrested with a few others on October 3 after the NCB raided a cruise ship off the Mumbai coast and claimed to have seized drugs, including charas.
The NCB team, led by senior officials of the agency, visited Shah Rukh Khan's residence 'Mannat' in suburban Bandra in the afternoon for some paperwork, sources said.
Another team of the NCB also visited actor Ananya Pandey's residence in Bandra, they said.
Pandey has been asked to appear before the NCB on Thursday to record her statement, the sources said.
Earlier in the day, Shah Rukh Khan met his son Aryan Khan at the Arthur Road jail in Mumbai where the latter has been lodged following arrest in a case of seizure of drugs on board the cruise ship off the city coast.
A special court here on Wednesday denied bail to Aryan Khan, observing that 'on the face of it', he was indulging in "illicit drug activities on a regular basis".
His WhatsApp chats also showed, prima facie, that he was in touch with drug peddlers, the court noted.
Aryan Khan subsequently moved the Bombay High Court to challenge the lower court's order.
The HC on Thursday said it would hear his bail plea on October 26.