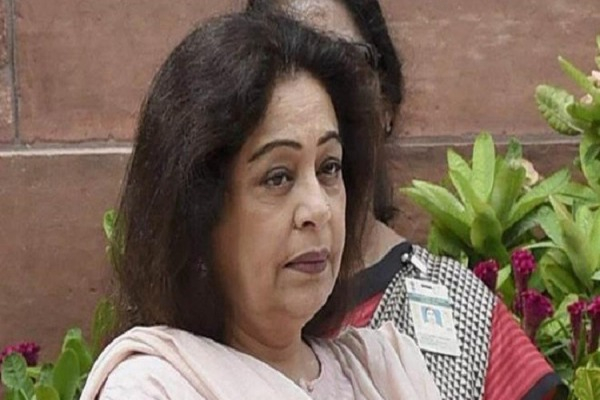 BJP MP and actor Kirron Kher has expressed her gratitude to fans for their love and support as she battles multiple myeloma, a type of blood cancer.

In April, her actor-husband Anupam Kher released a statement informing that Kirron Kher was undergoing treatment in Mumbai and was on her path to recovery.
In her maiden video appearance since her diagnosis, Kirron Kher, 68, greeted her fans during her son, actor Sikandar Kher's Instagram live on late Wednesday evening.
Sikandar Kher began the live session with a glimpse of his mother's feet as she rested on a couch and asked her to say hello to her fans.
"Thank you for constantly asking me about her... She is doing a lot better," Sikandar Kher said.
Kirron Kher interrupted him, saying she wanted to show her face and speak to her well wishers directly.
"Hello. Thank you everybody for your good wishes and love. Thank you very much," the veteran, who looked slightly frail, said with a smile.
A sling could also be seen on her left arm.
The actor, known for films like "Devdas", "Khamosh Paani", "Veer Zaara" and "Dostana", took her second dose of COVID vaccine last month.