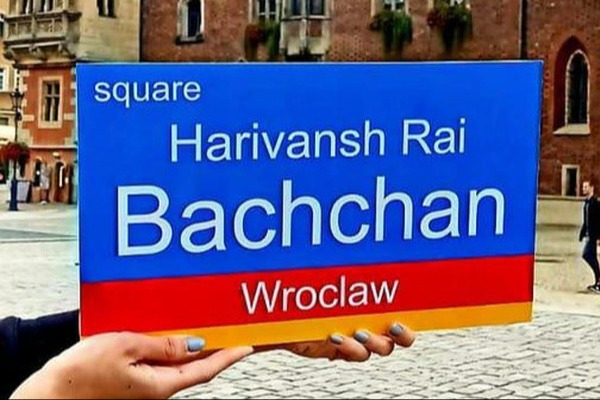 Megastar Amitabh Bachchan says he is thrilled that the city of Wroclaw in Poland has named a square after his late father and celebrated poet, Harivansh Rai Bachchan.

The 78-year-old actor took to Instagram on Sunday and posted a picture of a signboard of the square embossed with Harivansh Rai Bachchan's name.
Amitabh Bachchan said getting to know about the honour for his father was a "blessing" on Dussehra.
"The City Council of the City of Wroclaw, Poland has decided to name a Square after my Father. There could not have been a more apt blessing on Dushhera than this.
"A moment of extreme pride for the family, for the Indian community in Wroclaw and India. Jai Hind (sic)," he captioned the picture.
Earlier in July, students of the University of Wroclaw paid homage to the veteran Hindi poet by reciting his popular poem 'Madhushala'.
In 2019, Amitabh Bachchan visited Poland where his father was honoured at one of the oldest churches of the country.
"At one of the oldest Churches in Europe, in Poland a prayer for Babuji. So touched and such an emotional moment, his soul must be at peace and love. Thank you Bishop and the people of Poland, such an honour," the screen icon had tweeted.
Harivansh Rai Bachchan, a poet of the Nayi Kavita literary movement of early 20th century, received the Padma Bhushan in 1976 for his service to Hindi literature. He passed away in 2003.