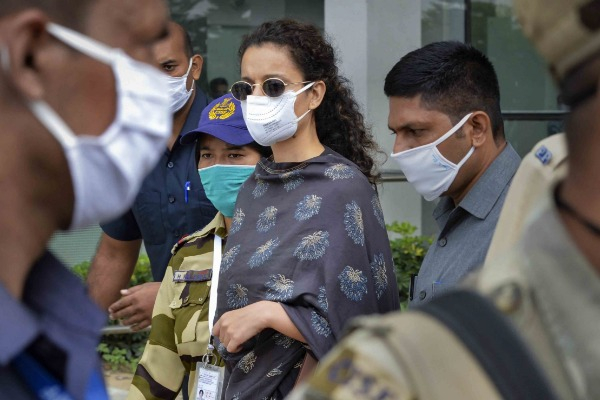 Actor Kangana Ranaut on Monday left Mumbai for her home state Himachal Pradesh, saying she has been terrorised with "constant attacks and abuses" and declaring that her analogy comparing the city with Pakistan occupied Kashmir was "bang on".

The actor, whose comments triggered a spat with Maharashtra's ruling Shiv Sena, arrived in the city from her home in Manali last week for a short visit.
On the same day her office here faced action for "illegal" alterations by Shiv Sena-led Brihanmumbai Municipal Corporation (BMC), following which she moved the Bombay High Court which stayed the demolition.
"With a heavy heart leaving Mumbai, the way I was terrorised all these days constant attacks and abuses hurled at me attempts to break my house after my work place, alert security with lethal weapons around me, must say my analogy about POK was bang on(sic)," Ranaut wrote on Twitter.
Targetting the ruling party, the 33-year-old actor said the protectors had declared themselves to be "destroyers" and were working towards dismantling democracy.
"But they are wrong to think I'm weak. By threatening and abusing a woman, they are ruining their own image," she added.
On Sunday, Ranaut met Governor Bhagat Singh Koshiyari at Raj Bhavan to apprise him of the "injustice" done to her.
The actor has been aggressively criticizing the film industry and the way it functions since the death of actor Sushant Singh Rajput in June. She initially said it was not a suicide but a "planned murder" by an industry that does not acknowledge outsiders.
Ranaut escalated her attack to tackle the alleged drug nexus in the industry, as well as targeting the Maharashtra government for its handling of the case. She sparked anger after she compared Mumbai to Pakistan-occupied-Kashmir.
Her spat with Shiv Sena spokesperson Sanjay Raut led to her receiving Y-plus security a detail of around 10 armed commandos who accompany the actress whenever she travels.
On her arrival in Mumbai last week, BMC exempted Ranaut from the 14-day home quarantine rule for those arriving from outside the state after she submitted an online application for the exemption as she was on "a short visit.