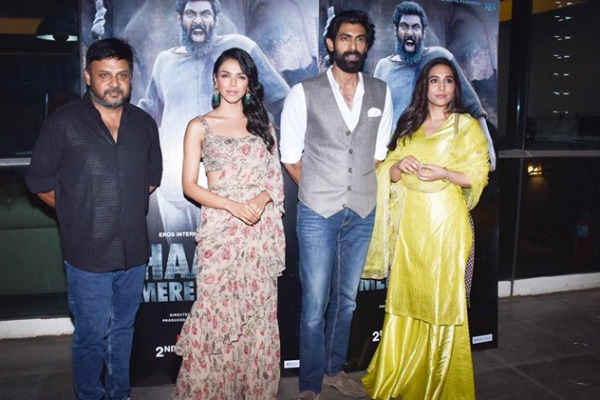 Actor Rana Daggubati says mounting his upcoming action spectacle "Haathi Mere Saathi" involved lots of challenges as they were focused on doing justice to the story.

Directed by Prabhu Solomon, the movie is about 'a man who fought for the jungle, the animals and against the society'. It will release across the country in three languages -- Hindi, Tamil and Telugu -- on April 2.
"It's not an easy film to get done. There were challenges. We were dealing with nature, dealing with three languages and the elephants. You have so many factors that are not going to be with you everyday but that's what it is about, completing a story.
"I went back two years while watching the making. I'm a different man today because I was able to do all these things," Rana told reporters.
The actor said for his character in "Haathi Mere Saathi", he had to shed to his weight by 30 kgs.
"After 'Baahubali', when Prabhu sir met me, I was looking like a bull. He said we have to try and figure something else out. We started understanding how will a person be if he's lived in the jungle for so long, what the nature of his food be and that's the physicality we brought along."
Rana says the film is a reflection to the environmental crisis across the world.
"It's a mirror to the society. This happening in many parts of the country, the world. Everywhere there's an elephant corridor and urbanisation around. There are cities which grow and break the natural habitat.
"As filmamkers, artises, we have films to voice out certain things. To influence people in the most entertaining way possible..."
The film also features Pulkit Samrat, Shriya Pilgaonkar and Zoya Hussain.