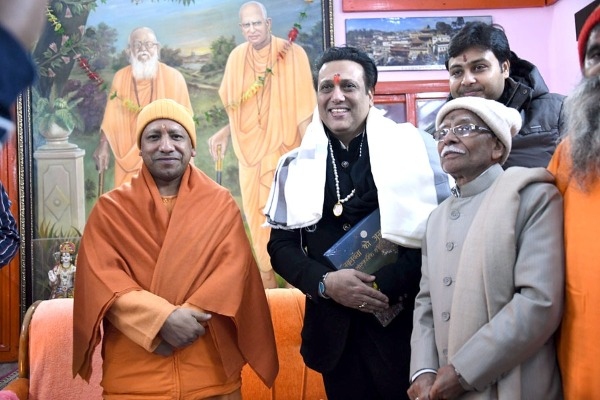 During the meeting that lasted for around half-an-hour, the chief minister and the actor, who is also a former Congress MP, discussed various issues, including the development of Uttar Pradesh.
Adityanath asked the actor for shooting films in the state and while enumerating the efforts put in by his government to promote tourism in the last two years, mentioned Ramgarhtal in Gorakhpur, which has been developed from the point of view of tourism.
The chief minister also gave detailed information about the Kumbh Mela to the actor and presented him with a book, titled "Manavta ki amoort sanskritik dharohar Prayagraj Kumbh-2019".
A huge crowd gathered to have a glimpse of the popular Bollywood actor.
Govinda took the blessings of Brahmleen Avaidyanath after visiting his "samadhi" and also praised Adityanath, manager of the temple, Dwarika Tiwari, told reporters.
The Bollywood actor had taken part in an award function at the Syed Modi Railway Stadium here on Saturday.
Clad in a red suit, he sang film songs and delivered many of his popular dialogues.