I will be quiet, that's my stand: Alia on attacks by Kangana's sister 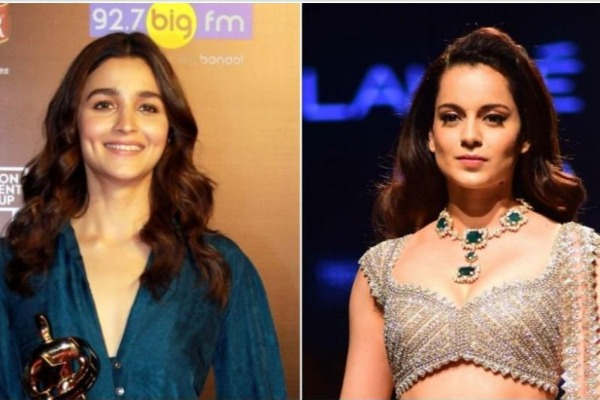 Alia Bhatt and her family has been at the receiving end of comments by Kangana Ranaut's sister Rangoli Chandel, but the actor has stayed mum throughout and now she says she wants to focus only on positivity.

Recently, Alia, her mother Soni Razdan and father Mahesh Bhatt were targeted by Rangoli on Twitter.
She wrote, after Kangana refused to do a film for the Bhatts, Mahesh got so upset that he threw a slipper at the actor.
Sharing another tweet about the nationality of Razdan, Rangoli had written people should think about agenda of "these non-Indians who are living off this land, using and abusing its people and its resources..."
On Sunday night, a reporter lauded Alia for being "mature" and asked if comments directed to her family bother her.
To which, Alia told reporters, "If I am like this, then my family is ten times more mature and stronger than I am. I don't want to get into this. I want to be happy, positive, work hard and be a better version of myself everyday."
The 26-year-old actor said she would rather focus on her career.
"I should not pay attention to what people say or don't say. Everybody has the right to say what they want to. I will be quiet, that's my stand."
In an earlier interview, Kangana had blasted Alia as well as superstar Aamir Khan for not supporting her during the release of "Manikarnika: The Queen of Jhansi".
Kangana had also called Alia and her "Gully Boy" co-star Ranveer Singh "irresponsible" for their apolitical stance on current affairs.
At the event, Alia was also asked if she has introspected about her latest release "Kalank", which has received a lukewarm response from the audience.
"I'm not going to analyse my film because that is something not required. Audience verdict is the biggest proof for a film and if the audience does not accept a film, then it should not do well.
"That's just the way it is. We should accept it, come back, try and make sure they're not disappointed next time.