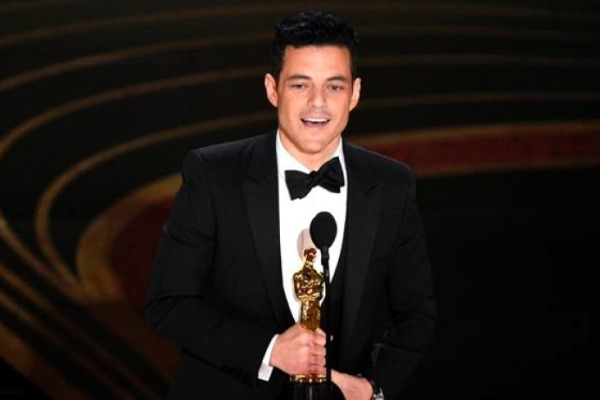 In a tightly-fought race, the actor was pitted against industry veterans -- Christian Bale for "Vice", Bradley Cooper for "A Star is Born", Viggo Mortensen for "Green Book" and Willem Dafoe for "At Eternity's Gate".
But he had already cemented his position as the frontrunner by scooping up the precursor awards -- Golden Globe, BAFTA and the Screen Actors Guild.
Academy members love physical transformation and Malek was at his peak when he brought to life one of the greatest musicians ever, eclipsing the metamorphosis by Bale, who gained considerable amount of weight to play former US vice president Dick Cheney.
Malek brought a heartbreaking vulnerability to Mercury in the quieter moments of the biopic while keeping the audiences spellbound in the bits when he was performing.
He was especially memorable in the last 15-minutes of the film as he recreated Mercury's Live Aid concert, considered one of the best rock performances of all time.
The role was earlier supposed to be done by Sasha Baron Cohen but he left the project due to creative differences with Queen members, giving Malek a chance to step in and he alluded to this fact in his acceptance speech.
Malek, in one of the most emotional and heartfelt speeches of the ceremony, remembered his late father and showered love on his mother, who was in the audience.
"I may not have been the obvious choice, but I guess it worked out. Thank you, Queen. Thank you guys for being, for allowing me to be the tiniest part of your phenomenal, extraordinary legacy. I am forever in your debt," he said.
The 37-year-old actor said the film was for people who have struggled with their identity and place in the world.
"I think about what it would have been like to tell little Bubba Rami that one day this might happen to him, and I think his curly-haired little mind would be blown. That kid was struggling with his identity, trying to figure himself out.
"And I think to anyone struggling with theirs and trying to discover their voice, listen we made a film about a gay man, an immigrant, who lived his life just unapologetically himself. And the fact that I'm celebrating him and this story with you tonight is proof that we're longing for stories like this," he said, in a reference to Mercury.
Malek said being the son of immigrants from Egypt, he understands how important they are in the fabric of a country's history.
"I am the son of immigrants from Egypt. I'm a first generation American and part of my story is being written right now and I could not be more grateful to each and every one of you, and everyone who believed in me for this moment. It is something I will treasure for the rest of my life," he said. The actor, who also found love on the film's set in co-star Lucy Boynton, gave a shout out to the British actress, saying she was the heart of the film and she had "captured" his heart.
Malek had worked hard to honour Mercury's legacy.
Speaking to PTI about the challenges of playing Mercury in last November ahead of the film's India release, Malek had said it was a challenging task for him to do justice to Mercury's portrayal.
"It was difficult to play Freddie, a challenge I would not wish on anyone. But it was a story worth telling. When you think about Freddie, you think about someone who was almost superhuman. He defied what we consider mortal humans to be capable of," Malek had told PTI.
"I have never worked this hard on anything to honour a human being. I pushed myself to my absolute limit to play him. I did not want to lie awake at night thinking, 'I did not do everything that I could while I was on the set."
Malek's likeable persona and his complete ownership of the character may have warmed the Academy voters towards him but there was a time when the off-screen drama surrounding the biopic almost derailed the film and his Oscar chances.
Director Bryan Singer was fired weeks before the film was to be completed for his alleged unprofessional behaviour, including an altercation with Malek during the shooting.
Dexter Fletcher eventually took over to complete the film even though Singer retained the directorial credit, making the film a tainted product by association as allegations of sexual harassment against Singer piled up in the run-up to the Hollywood awards season.
To add to the trouble, the film received negative to average reviews by the critics with many accusing the Queen's surviving band members of glossing over Mercury's life and his Indian roots.
Despite the not so good reviews, Malek was singled out for his performance in the film, helping it become one of the highest earning musical biopics of all time.
The actor, who burst on the international scene with his performance as a hallucinating hacker in TV show "Mr Robot", is looking ahead at a great career in Hollywood after bringing home his first golden knight.