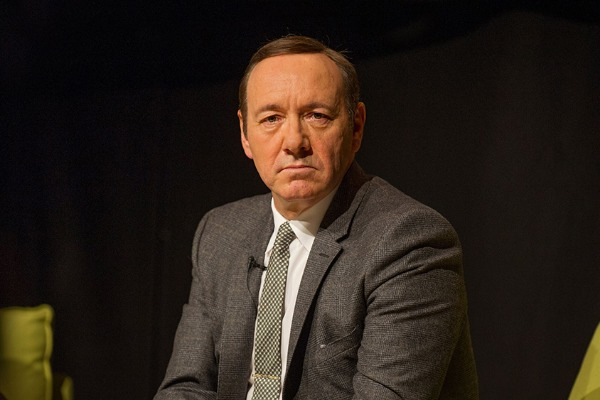 Kevin Spacey is facing a felony following an accusation of sexual assault that hit the headlines last year and the actor has shared a bizarre video clip on his social media, suggesting "we're not done".

According to Variety, the charge is related with an allegation of misconduct that was made by former TV anchor, Heather Unruh, who said that the "House of Cards" star sexually assaulted her 18-year-old son in July 2016 at a Nantucket bar.
Michael O'Keefe, the Cape and Islands district attorney in Massachusetts, said in a statement Monday that Spacey would be arraigned on January 7 for one charge of indecent assault and battery, the first criminal charge levied against him as a result of sexual misconduct allegations.
In the statement, O'Keefe also said there was a public show-cause hearing in Nantucket District Court last Thursday, after which Clerk Magistrate Brian Kearney issued the criminal complaint.
The legal counsel for the actor did not immediately respond to requests for comment.
On his part, Spacey shared a weird video on his Twitter Tuesday in which he addressed the audience in Frank Underwood's Southern accent, breaking the fourth wall as he did when he starred in Netflix's hit political drama series.
In the over three-minute-long clip, the actor delivered a monologue over a kitchen sink while wearing an apron flaunting Christmas colours, in which he alluded to allegations against him that first surfaced last October when actor Anthony Rapp accused Spacey of making a sexual advance when he was a minor at a party in 1986.
Twenty other men later came forward to report that Spacey had engaged in inappropriate sexual behaviour during his tenure as the artistic director of the Old Vic Theatre in London.
"I know what you want. Oh sure, they may have tried to separate us, but what we have is too strong. It's too powerful. I mean, after all, we shared everything, you and I. I told you my deepest, darkest secrets. I showed you exactly what people are capable of. I shocked you with my honesty, but mostly I challenged you and made you think. And you trusted me, even though you knew you shouldn't. So we're not done no matter what anyone says.
"Of course some believed everything. They're just waiting with baited breath to hear me confess it all. They're just dying to hear me say that everything was true and I got what I deserved," the actor says in the video.
Spacey further asks his viewers if they rushed to deliver a judgement "without evidence and facts".
"All this presumption made for such an unsatisfying ending and to think it could have been such a memorable send-off. I can promise you this: If I didn't pay the price for the things we both know I did, I'm certainly not going to pay the price for the things I didn't do.
"Despite all the poppycock, the animosity, the headlines, the impeachment without a trial. Despite even my own death, I feel surprisingly good and my confidence grows each day that soon enough you will know the full truth," he says.
Towards the end, referring to his part being axed from "House of Cards" as a following allegations, Spacey taunts the viewers asking the question, "You never actually saw me die, did you?"
He then puts what looks like a wedding ring on his index finger and glared at the camera, saying "Conclusions can be so deceiving. Miss me?"
This video is Spacey's first post after over a year since his response to Rapp's claims in which he apologised to the "Star Trek: Discovery" actor Rapp saying that he "does not remember" any such encounter but he is "sorry" if he behaved in such a manner under the influence of alcohol.
Spacey also addressed his sexuality in the same post.