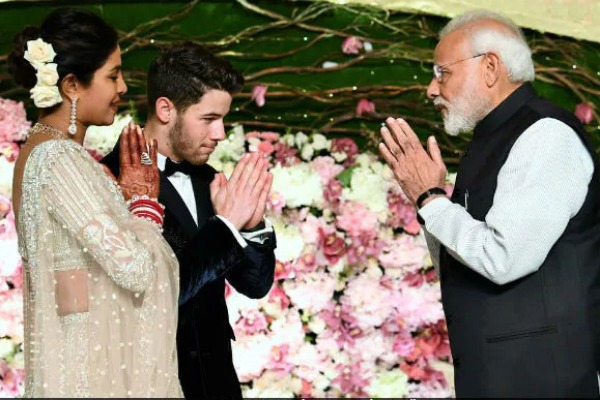 Actor Priyanka Chopra on Wednesday expressed her gratitude to Prime Minister Narendra Modi for wishing her a "happy married life".

The prime minister, who attended Priyanka and American singer Nick Jonas' wedding reception on Tuesday, congratulated the couple on Instagram.
Congratulations @priyankachopra and @nickjonas. Wishing you a happy married life," PM Modi wrote while sharing a photograph from the event.
Priyanka, who got married to Nick last weekend in a lavish twin wedding ceremony in Jodhpur, Rajasthan, appeared for a photo-op at Hotel Taj Palace in the national capital.
PM Modi was one of the prominent dignitaries at the event which was a close-knit affair with family and close friends.
Priyanka took to Twitter to thank the prime minister for his blessings.
Tagging Nick, the 36-year-old actor wrote, "A heartfelt thank you to our Hon'ble Prime Minister Shri @narendramodi ji for gracing us with your presence. Touched by your kind words and blessings."
Nick also posted a reply on PM Modi's photo on Instagram, saying, "Thank you for gracing us with your presence Prime Minister sir. Your well wishes mean the world."
Similar to the two-part nuptials, the reception was also a fiercely guarded event.
There was tight security around the luxury hotel and since the prime minister attended the event, policemen were also on their toes.
Priyanka and Nick, 26, exchanged wedding vows on December 1 at Jodhpur's majestic Umaid Bhawan Palace in a Catholic ceremony officiated by the groom's father Kevin Jonas Sr. It was followed by an equally grand wedding as per Hindu traditions on December 2.
Congratulations have been pouring in - both from within the fraternity and outside - since the couple first exchanged vows.