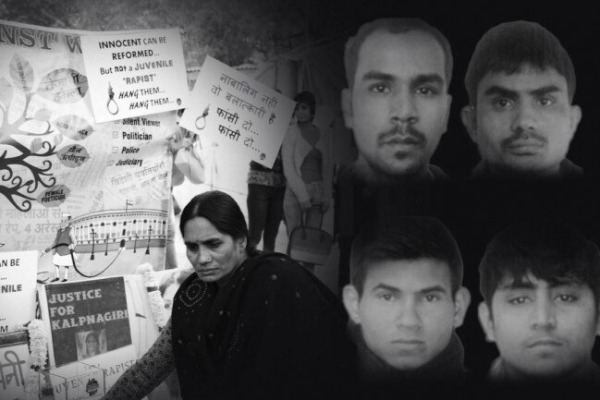 The four men convicted of the gang rape and murder of a Delhi woman on December 16, 2012 were hanged in the darkness of pre-dawn on Friday, ending a horrific chapter in India's long history of sexual assault that had seared the nation's soul.

Mukesh Singh (32), Pawan Gupta (25), Vinay Sharma (26) and Akshay Kumar Singh (31) were executed at 5.30 am for the savage assault in an empty moving bus on the 23-year-old physiotherapy intern who came to be known the world over as Nirbhaya, the fearless one.
"Doctor has examined the bodies and declared all 4 dead," Director General of Tihar Jail Sandeep Goel said.
Jail officials said the bodies were kept hanging for half an hour, a mandatory procedure after execution as per the prison manual.
This is the first time that four men have been hanged together in Tihar Jail, South Asia's largest prison complex that houses more than 16,000 inmates. The executions were carried out after the men exhausted every possible legal avenue to escape the gallows. Their desperate attempts only postponed the inevitable by less than two months after the first date of execution was set for January 22.
In last-gasp attempts, one of the convicts knocked on the doors of the Delhi High Court and the Supreme Court just hours before the hanging.
Hours before the execution, Pawan Kumar Gupta approached the Supreme Court challenging rejection of the second mercy petition by the President.
In an unprecedented late-night hearing that began at 2.30 AM and lasted an hour, a Supreme Court bench dismissed his last plea, paving the way for the execution.
It also refused to pass any direction allowing Gupta and Akshay Singh to meet their family members just before they are sent to the gallows.
Relieved that their daughter finally got justice after a seven-year-long legal struggle, Nirbhaya's parents said they will continue their "fight for India's daughters".
"We finally got justice. We will continue our fight for justice for India's daughters. Justice delayed, but not denied," her mother told reporters after the hanging.
She added that women will definitely feel safer after the execution of the convicts.
The mother said the entire country was awake and waiting for justice.
There was cheer after the hanging as hundreds of people, carrying the national flag and shouting slogans of 'long live Nirbhaya' and 'Bharat Mata ki Jai', gathered outside the Tihar Jail since early hours of Friday.
Some of them distributed sweets after the four convicts were executed.
Among the people who gathered outside the jail was social activist Yogita Bhayana. She held a poster which read 'Nirbhaya has got justice. The other daughters still await'.
"Justice has been delivered finally," she said, adding it was a victory of the legal system.
Sana, a resident of west Delhi, said, "Nothing will change after this hanging in our society, but we are happy that the four convicts have been hanged and the justice was delivered to Nirbhaya."
After raping and brutalising Nirbhaya, the men, one of whom was a juvenile at the time, dumped her on the road and left for dead on the cold winter night. Her friend who was with her was also severely beaten and thrown out along with her. She was so severely violated that her insides were spilling out when she was taken to hospital. She died in a Singapore hospital after battling for her life for a fortnight.
Six people, including the four convicts and the juvenile, were named as accused.
While Ram Singh allegedly committed suicide in the Tihar Jail days after the trial began in the case, the juvenile was released in 2015 after spending three years in a correctional home.
The road to the gallows was a long and circuitous one, going through the lower courts, the High Court, the Supreme Court and the president's office before going back to the Supreme Court that heard and rejected various curative petitions.
The death warrants were deferred by a court thrice on the grounds that the convicts had not exhausted all their legal remedies and that the mercy petition of one or the other was before the president.
On March 5, a trial court issued fresh death warrants for March 20 at 5.30 am as the final date for the execution.