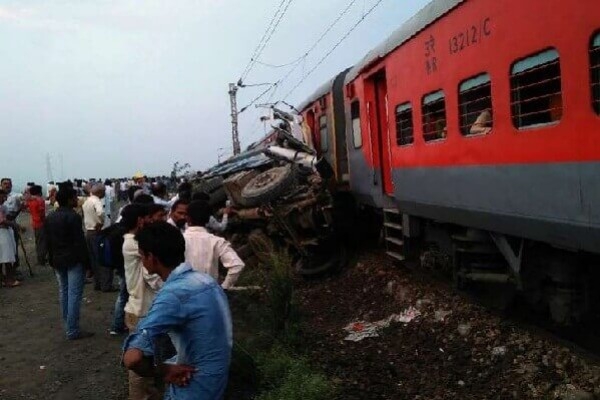 At least 13 school children were killed and several others injured when a train hit a van carrying 20 children at an unmanned level crossing near Dudhi railway station in Uttar Pradesh’s Kushinagar district around 7 am on Thursday. All injured have been admitted to Kushinagar district hospital for treatment. Four of the children are critically injured children and battling for their lives.

The driver of the van, who allegedly ignored the warning of gate mitra and the whistle blown by the train, also died on the way to the hospital. As per eyewitness, the driver had his earphones on, and as a result, could not hear the approaching train or the gate mitra’s warning. The train was travelling to Gorakhpur from Bihar’s Siwan. Locals and district administration officials rushed to rescue on knowing about the accident. Expressing grief, Prime Minister Narendra Modi said he was ‘extremely saddened’ and added that the UP government and railway department would take appropriate action. Uttar Pradesh chief minister Yogi Adityanath announced an ex-gratia of Rs two lakh each to the deceased’s family and ordered an inquiry by the Gorakhpur commissioner Anil Kumar and submit a probe report at the earliest. “Deeply pained over deaths of school children in unfortunate train accident in Kushinagar. Praying to god for peace to departed souls and strength to parents. Instructions have been issued to provide complete treatment to those affected in accident and for all possible help,” tweeted Adityanath, who was reported to have rushed to the accident spot from Lucknow.

Adityanath’s deputy Keshav Prasad Maurya and transport minister Swatantra Dev Singh also expressed condolences over the deaths of the children. Railways minister Piyush Goyal also announced an ex-gratia of Rs two lakh to the kin of the deceased in a tweet. As per reports, the accident occurred when the Tata Magic van of Divine Public School was taking the children to school. Sanjay Yadav, CPRO, north eastern railways, said the van driver did not heed to repeated warnings of the gate mitra as he was running late in getting the children to school. “The train (55075) driver too blew whistle in warning but he (van driver) ignored it, leading to the accident,” he said. This is the second tragic incident this month involving schoolchildren. Twenty-three children were among 30 killed when a private school bus ferrying them home veered off the road and plunged into a 200-foot-deep gorge at Malakwal in Nurpur in Kangra district of Himachal Pradesh on April 9. India’s railroad network is one of the world’s largest with 23 million people riding daily on about 11,000 passenger trains.