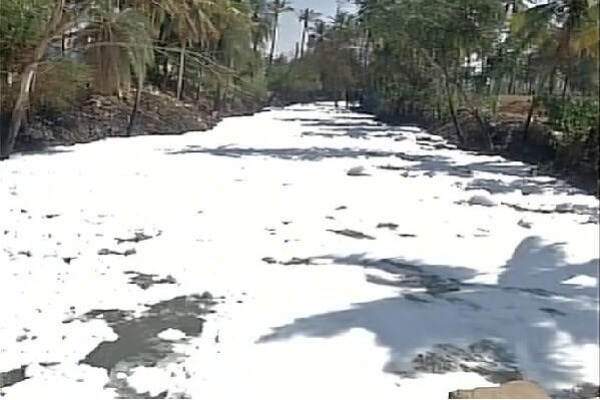 Toxic froth was seen yet again in Bengaluru's Bellandur Lake on Wednesday (April 4). The relief, if it can be called so, is that the foam has not spilt on the nearby streets as it happened on a few occasions last year. Bellandur lake is one of the oldest and largest lakes in Bengaluru and has been in the news for wrong reasons because of pollutants being dumped into it.

Bellandur lake is part of Varthur lake series and is one of the highly polluted lakes in Bengaluru. It has become more or less a sewage tank because of untreated sewage water entering into the lake through various inlets.

This toxic foam can be hazardous to health: According to reports, the foam is toxic and reports say it is carcinogenic. It causes breathing difficulties, irritation on the skin, besides spreading an unbearable stench. Whenever it rains, the lake overflows, spilling the froth onto roads, blocking traffic.

Dumping of untreated waste is the main reason behind frothingL: Taking note of the cringeworthy state of the lake, the national green tribunal had last year asked Karnataka government to file replies on a PIL that was filed.

Foam has become a major problem for residents in vicinity of the lake: Each time a frothing incident takes place, the government including the civic authorities and district in-charge minister make fresh promises, none of which have materialised.

Last year, the foam had spilled onto the streets: Last year in September, due to heavy rainfall froth from Bellandur lake spilt on to the streets. Karnataka State Pollution Control Board (KSPCB) had claimed to have cracked down on industrial effluents, action on domestic effluents remained primarily through notices.