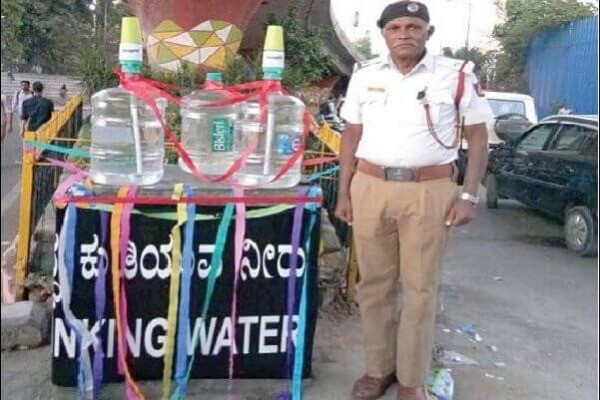 BENGALURU: With the city in the midst of a scorching summer, the policemen have donned the role of Good Samaritans near Richmond Circle. They are providing free drinking water to motorists and pedestrians. The man behind this drive is Nagesh Rao, an assistant sub-inspector attached to Ashok Nagar traffic police station and deployed at Richmond Circle.

He observed that several motorists, pedestrians and even the policemen on duty were finding it tough to quench their thirst. Most of them were forced to buy packaged drinking water from nearby shops. Rao decided to do something about this and discussed the matter with his superior Inspector B.A. Vijee Kumar, who suggested that he come up with a plan to provide free drinking water. Rao told Deccan Chronicle, “I thought of various ideas but in the end decided that we can keep 25-litre mineral water bottles. I discussed the idea with the inspector and other staff and every one were ready to pool in money to buy the cans.” He also found help from a few local residents, who helped him build a small concrete slab to place the bottles. “I discussed the idea with a few people who live nearby and a couple of shopkeepers, who readily agreed and helped us. We got the concrete slab ready and purchased the water bottles along with few glasses.”

On Tuesday morning, Rao placed the water bottles along with the glasses and went for his duty. Rao noticed that several people were making use of the facility and they had to get four more bottles. “I saw that motorists would park their bikes at one side of the road and come to drink water. Even the pedestrians began using the facility. They were all curious about who had placed the water bottles and got to know that the traffic police were behind the initiative. Some of them stopped by and thanked us for the gesture,” Rao added. Inspector Kumar appreciated Rao for his initiative. “He is known for his discipline and every day, without fail, he would turn up for duty at 7 am, as our jurisdiction sees heavy traffic due to the presence of various schools in the area and because it is part of the Central Business District. Rao is a good example for the young generation.” A senior traffic police officer also said that they are thinking of installing a water kiosk at the Richmond Circle to provide free drinking water to the public.