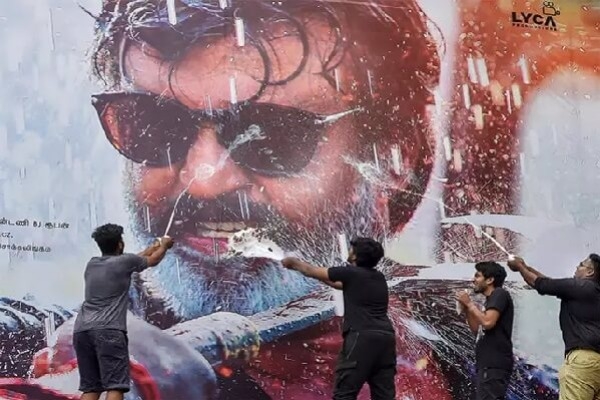 The multilingual Kaala, starring Tamil superstar Rajinikanth, was shown from Thursday evening in a dozen theatres and six multiplexes here amid tight security after protesters were whisked away and detained, police said.

“Some theatres and multiplexes started screening the film after about 300 protesters were taken away and detained in police stations across the city,” a police officer told IANS here. Hundreds of fans thronged multiplexes such as Inox, PVR, Lido and Garuda in the city to watch the movie on the first day after the exhibitors avoided screening it in the morning and afternoon due to protests by activists of pro-Kannada organisations. Earlier in the day, over 100 theatres and multiplexes across Karnataka deferred screening the film amid vociferous protests against the film over Rajinikanth’s pro-Tamil Nadu stance on the Cauvery river water sharing issue.

“It’s business as usual since evening as the protesters kept away and presence of police personnel made hundreds of fans to come and watch the movie under tight security,” a multiplex manager told IANS. As directed by the Karnataka high court on Tuesday, the state government deployed adequate police personnel at the theatres and multiplexes for the protection of fans and safety of public property after the activists urged distributors and exhibitors to avoid screening the film. “The situation is under control and there is no problem in showing the film after the police took away the protesters from the theatres and multiplexes to avoid any untoward incident,” the Urvashi theatre owner said. An official, on the condition of anonymity, said:

“We have not issued tickets for the morning and afternoon shows though many fans turned up to watch the movie on the first day first show as we do not want to antagonise the protesters and also want to ensure that the tense situation outside does not go out of hand.” Hundreds of activists also protested at Mysuru, Hubballi, Mangaluru, Ballari and Belagavi. “Cauvery water is more important than a Rajinikanth film for us. Our honour and Kannada pride are at stake. He (Rajinikanth) has hurt us by supporting the cause of Tamil Nadu in the sharing of the river water,” KRV President Praveen Shetty told reporters here. Many fans who bought the tickets online for the show on Wednesday were disappointed as they could not watch their favourite superstar’s film. Besides the original Tamil version, the film has been released across the country and beyond with sub-titles in Hindi, Telugu and English.